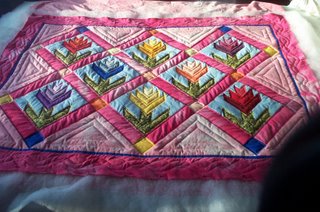 I almost finished quilting Summer's quilt today but at the end I made a mistake on the border. I almost didn't start doing the border because the light was going and I can see what I am doing so much better in daylight. I decided to go ahead and made a mistake so I will rip out and finish tomorrow. I only have a couple of inches to rip so it's not a big deal. The quilting shows up really well in this photo. I hope I have enough dark blue for the border. If not I will probably go with the dark pink.
Posted by Joyce at 3:36 PM No comments: 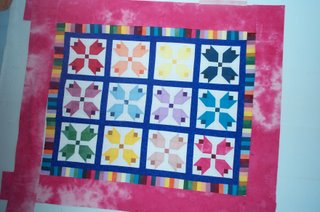 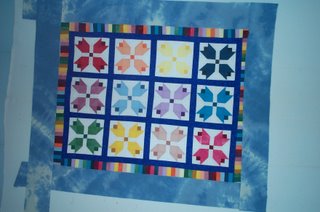 Now I have two choices for the border on Ariana's quilt. Today I dyed some light blue because we thought the pink was too strong.
A change of color certainly changes the mood of the quilt amazingly. The blocks stand out more with the blue but the pink is very nice too.

I will work on quilting Summer's while I ponder which color to use. What do you think , Ariana?
Posted by Joyce at 2:40 PM 2 comments: 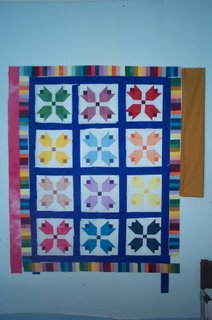 Here it is, decision time again. It seems to me that quilting is more about making decisions than anything else. I changed the sashing to dark blue and I think it sets off the blocks better. I love the multicolored strips on the inner border. Now what color to make the outer border? I think the binding will be the same dark blue if I have enough. It is just a bit left over from Free's quilt so it's a bit iffy and I doubt if I can get any more. If I don't have enought dark blue, I think the dark pink would be all right since I am planning to back it with that. If I go with the dark pink border, I could still bind it with the same color. I don't usually do that, but it might look all right. Also,I still have the option of the light pink sashing but a bit narrower. Too many options.
Posted by Joyce at 8:01 AM 1 comment: 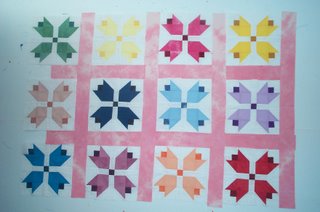 Finally got back to work today after a couple of days off for a cold. I think I have enough blocks to make the quilt the size I want. I still have to rearrange the colors a bit. I think the four darkest ones in the corners and the lightest ones in the center.
They are so much fun to make and it's fun picking out the colors too and seeing how they look when put together. I will put on a narrow pink border and then I am thinking of doing a second border of horizontal stripes in all the colors of the flowers. I will do a bit and see how it looks anyway. Then another wider pink one or maybe a darker pink, depending on how it looks.
Posted by Joyce at 2:03 PM No comments: 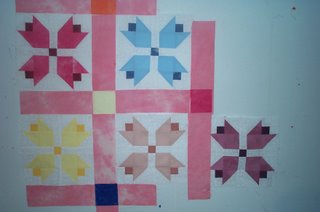 We didn't go to town today as planned, so, since I couldn't work on Summer's quilt until I get another batt, I started on Ariana's.

It is called Pieced Tulips.I thought it was appropriate that they both had tulips. It also uses up a lot of small pieces. When I was done a couple of the squares I realized it is almost the same block as Sandy and Christine's but it looks different partly because it's called a tulip so you see a tulip. You can see theirs on my second entry on my October 2005 blog.

I am not sure about the squares on the sashing. I might make those triangles or nine patch blocks. Also the blue is a bit too intense but they are only set there to see how they will look. Maybe I will just use the darker colors from each block. 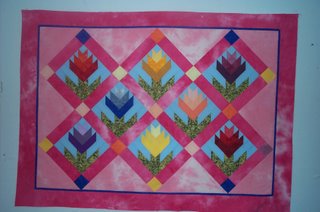 I had a bit of a crisis this morning when I pinned the finished quilt up and noticed that one of the pink side borders was only 2 1/2 inches wide instead of 3 1/2 inches like the others. It would have been no problem if it had been the end ones which I put on last. As it was the ends were going to be one inch short once the side was corrected. I had to decide whether it was worth it to put on new end pieces or add an inch. I finally opted to add the inch because I'm pretty sure the seam will disappear into the quilting and binding.

Now it is all marked and ready to be basted. I have to wait on that until tomorrow when I go to town and get some batting and pink thread. The back will be the same light pink as the triangles. I will quilt with that shade of pink thread. I will quilt around the flowers, in the ditch along the sashing and nested triangles inside the pink triangles.

I will bind it with the dark blue. The only thing I am not totally satisfied with is the little square on the lower right end. It seems a bit dull compared with the others. 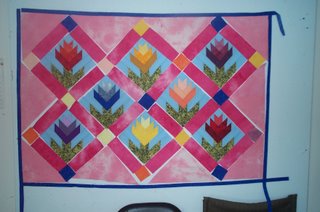 I got all the tulips finished and then spent the rest of the morning and most of the afternoon dyeing some fabric pink for the sashing and borders. The first one was called Hot Pink, but I thought it looked too bright and might drown out the tulips so I did another piece with a very diluted red. Turned out that I used both of them. The background triangles were blue in the one in the book but I didn't have enough blue so I went with the lighter pink. I got part of it sewn together but the camera battery died before I could take a photo. The next decision is whether to use the light pink for the outer border with a dark pink binding or a dark pink border with a blue binding.
I am also starting to think about how I will quilt it. That's always a difficult decision for me.
I am really pleased with how the flowers turned out. Hopefully I will get it all sewn together tomorrow and maybe the binding on, if I can decide on the colour scheme for it.
Posted by Joyce at 2:21 PM No comments: 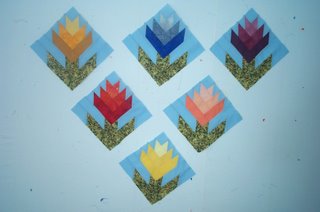 I made a few more tulip blocks and have decided to discard the two I made yesterday. The first one is in the wrong order and the plain one is too bland. I am happiest with the purple one but that is done with fabrics I hand dyed last fall using a gradated dyeing technique, so they all match perfectly. The blue is the least successful because the top of the flower is too light and doesn't show up enough. I will probably run out of the green that I am using for the leaves unless there is a piece hiding among my scraps. Time for a deep search or else a few will be made with different leaves. The next decision is what to use for sashing and the triangles in the edges and the border.
Posted by Joyce at 11:39 AM 3 comments: 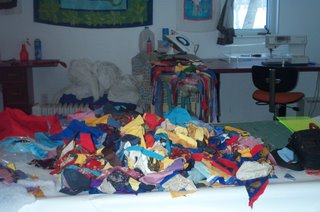 We are back from our wonderful holiday in San Diego and ready to get back to work. I have been sorting through some of my scraps and trying out a few blocks for Summer's quilt. I seem to have collected quite a few bits and pieces! 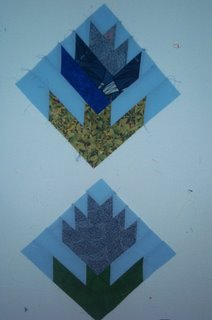 I am thinking of the tulip block. I kind of like the log cabin but maybe for a young girl, the tulips would be nicer. I like the one with all the same color better than the mixed one. I would make a pink, yellow, mauve and purple one. 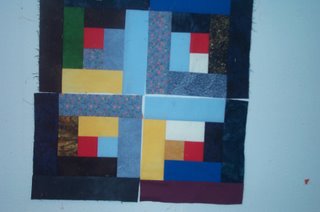 The log cabin is nice but maybe I'll save that one for later.
Posted by Joyce at 4:42 PM No comments:

Joyce
Come join me in my quilting and hiking adventures. 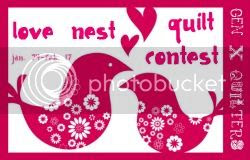