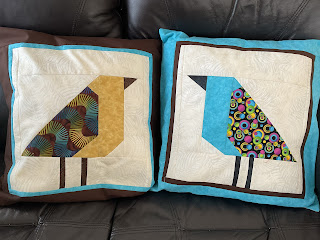 I made a couple of larger birds into a pillow.  The pillows are about 18 inches square.  I can see a few more of these in the future. 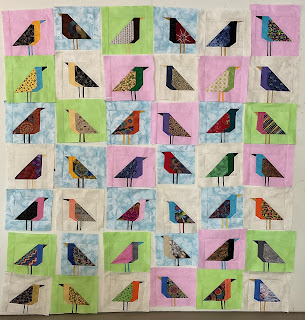 The flock has grown to 42 and that’s enough birds.  Now to assemble them. I need to trim them and sew them together. I won’t use sashing but may insert a bit of floral fabric randomly to add interest.

The Flock so Far 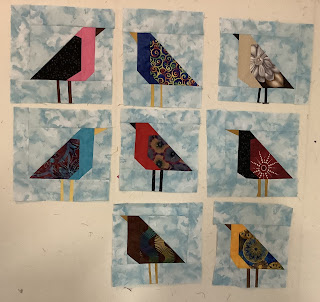 The flock is growing slowly.  I have added a couple facing the opposite direction.  Unfortunately I only have enough blue backing to make one more bird.  The rest will be off white or pale green or a mixture of both.
Posted by Joyce at 8:02 AM No comments:

Birds of a Feather… 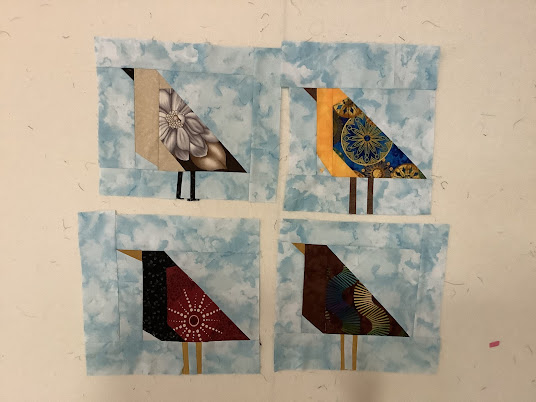 I am making a flock of birds which may or may not end up being a quilt.  It’s a fun way to use up a few more scraps.
Posted by Joyce at 1:15 PM No comments:

I decided that since my scrap tub was overflowing again, it was time to make another  scrap quilt.  I sewed together some long strips and then crosscut them to make strips.  I had a large piece of backing fabric in light beiges so I used that as sashing.  This is where I ran out of sashing fabric.  I’ll put a border on using a different beige and then decide if I’m going to buy backing fabric or do some more piecing.  The worst part is that the tub of scraps is still overflowing. 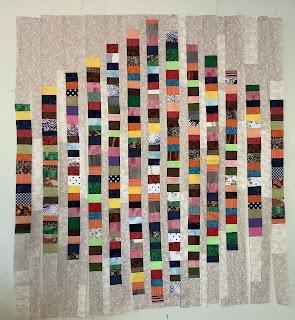 My cousin’s husband, John, is an avid runner and cyclist. When he saw some of my quilts he asked if I’d be able to make a t-shirt quilt.  I had never made one but thought I might as well give it a try. 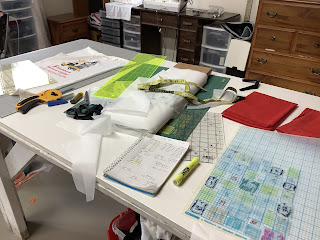 The hardest part was cutting up all those nice new t-shirts. I measured the logos, sorted by size and colour and pinned a number on each piece. Then I made a graph arrangement of the sizes and colours.  There were 37 shirts so it became a large quilt! 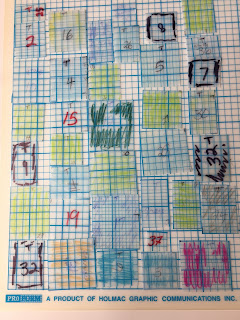 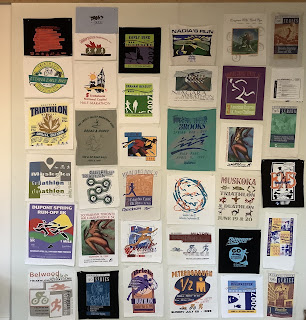 I spent quite a lot of time arranging on my design wall.  I loosely followed the graph but ended up making some changers.  I decided that the pieces needed to be separated somehow because there were so many whites but not all the same shade. It was a toss up between red and black but I went with red in the end because some of the blocks were black. 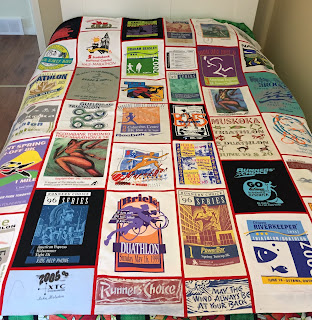 It looks great on the queen size bed. I was a bit nervous about quilting over some of the logos which were quite stiff but my Bernina handled them perfectly. 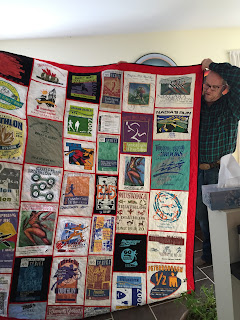 John was quite happy with the finished quilt.
Posted by Joyce at 7:20 AM 3 comments: 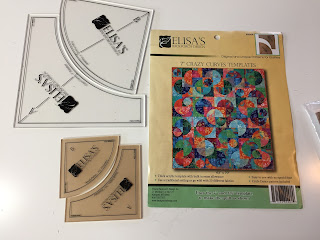 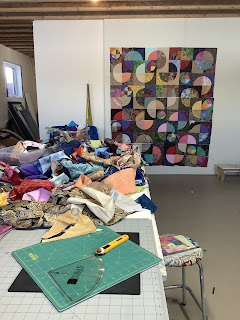 A few years ago at a quilt show I bought templates to make curved blocks.  The package only had the template for the larger blocks and I thought they made an interesting quilt. However, a few years later I found the small templates so I was able to make the quilt illustrated in the photo which was included with the large templates. This is my second attempt. I have been sewing the blocks into rows as I go because it’s very complicated and super easy to make mistakes. Yes there has been some ripping.  I also sewed every two rows together so now I have to complete sewing the rows and then decide on a border or borders. I have spent the last hour dealing with the scraps on the table. Some are discarded because they are too small, some large ones are sorted into colour families and a few ended up in the big tub of little scraps. Between Covid and the cold weather here (wind chills of -44 for a couple of days) I’ve gotten a lot of sewing done.
Posted by Joyce at 12:21 PM No comments:

Joyce
Come join me in my quilting and hiking adventures.